This is the sixth of a series of documents that describe the contents of the PLSS CadNSDI data set.

The PLSS Second Division is most commonly aliquot parts (areas resulting from equal halving and quartering) and government lots (or lots).  The PLSS Second Division contains all divisions below the First division, meaning that in some areas this may be quarter sections and in other areas it may be sixteenth areas.  Some implementations add another feature class for the Quarter Section only and put all divisions below the quarter section in the PLSS Second division.    These variations are compliant with the intended standard implementation.

The second division types are listed below

A typical configuration for the second division in a typical Section 6, the north and west most Section is as shown below.  Most commonly, the corrections for the curvature of the earth and measurement adjustments in the township are accrued into the northern most and western most sixteenth segment, meaning that regular government lotting will be seen on the northern and western boundaries of the township in these cases. 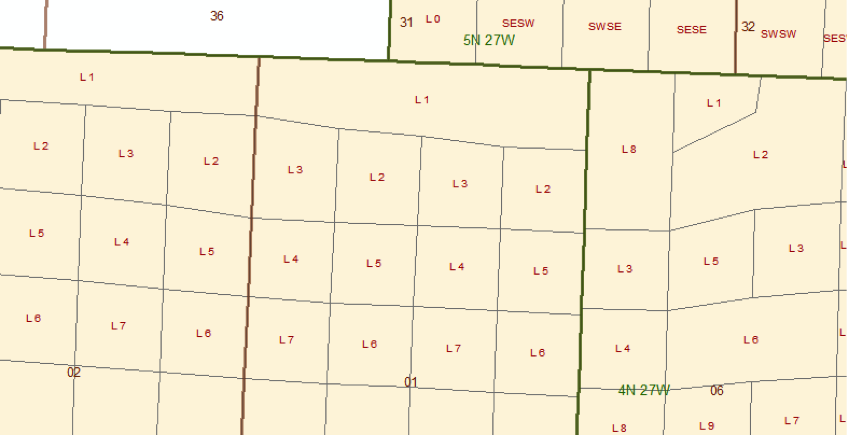 Government lots are numbered uniquely within the section, for the most part.  There are cases of duplicated lot numbers in a section. In these cases the second division suffix is used to distinguish one lot from another, typically with an A for the first occurrence and a B for the repeated occurrence.  In the figure above Lot numbers 7 and 8 are shown as duplicated. The figure below shows a portion of the original 1845 Government Land Office (GLO) Plat (T 4 N R 26 W, 5th PM, Section 1).

The PLSS CadNSDI data are a graphical representation and should not be used to replace a survey.  Over time the attribution of the PLSS CadNSDI will improve, but it will not stand in place of a land survey.

Posted by Nancy von Meyer at 9:38 AM No comments: